With multiple synthesis engines added over the last three versions, though, it now does so much more than just play back audio that it’s better described as a ‘sound design workstation’. HALion 6 (VST/AU/AAX – yay, AAX at last!) sees the integration of yet another flavour of synthesis, as well as real honest-to-goodness sampling, the ability to build your own custom instruments, and a boatload of new sampled content.

For sound designers, the biggest new feature in HALion 6 is the Wavetable Zone. This adds to the existing Synth (analogue-style synthesis), Sample, Grain (granular synthesis) and Organ (tonewheel emulation) Zones with a remarkably capable wavetable and resynthesis engine. It comprises two wavetable oscillators (each with up to eight unison voices in Multi-Oscillator mode) and a sub oscillator, with each wavetable holding up to 256 waveforms.

Importing a sample as a wavetable is done by dragging it into the interface and selecting a Marker Creation Mode to split it into a series of contiguous waves - Equal Distance (all markers are evenly spaced), Exponential (the spacing gets wider through the length of the sample), Spectral (markers are placed according to spectral changes) or Spectral Voiced (spectral and pitch changes).

HALion 6 adds more than 25GB of new sample content in the shape of six scripted instruments.

Raven and Eagle sample classical Italian and German concert grand pianos respectively, the first with six velocity layers, the second 12. Both share the same interface - including controls for adjusting the Sustain Resonance, velocity curve, and release layer volume - and sound lovely. Raven is more obviously appropriate for pop and other contemporary styles, while Eagle suits jazz, classical and solo work.

Hot Brass is a brass and saxophone ensemble instrument geared up for punchy, energetic riffs and stabs. A decent array of matrix-assigned modulation sources and an arpeggiator make it more interesting than it looks.

Studio Strings delivers quick and easy ensemble and solo orchestral strings for modern productions of all kinds. It’s not about to replace your high-end string library in terms of flexibility and range of articulations, but it sounds great in its comfort zone.

On a more electronic tip, the Anima wavetable synth is covered in the main text, and SkyLab uses the Granular engine to come up with a huge library of gorgeous textures, soundscapes, ambiences and FX - it’s definitely our favourite of the bunch.

The wavetable envelope is shaped by dragging the boundary markers between waves to stretch and compress them, and general playback speed, crossfades between waves, looping behaviour and more are all adjustable. Waveforms can be duplicated, moved, copied and replaced by new samples, and you can even get hands-on with the amplitude and phase of the harmonics of each waveform in the Spectrum tab.

With your wavetable set up, the playhead progression through it is controlled by the Position, Speed and Direction knobs, and visualised in a 2D oscilloscope or 3D topographical map. Of course, a new macro instrument, Anima, is included to show all this off in readily digestible form, dressing the Zone’s three oscillators, two LFOs and three envelopes up in a ‘proper’ GUI, and adding a superb arpeggiator and a ton of well-designed presets.

The addition of wavetables to the HALion mix is a very big deal, and Steinberg’s implementation is admirably straightforward and unintimidating. The Wavetable Zone would be impressive enough as an instrument in its own right, but as a sub-component of a broader instrument, it’s a remarkable achievement.

With DAWs making recording and transfer of audio so easy, sampling - ie, the recording of samples - is something that hardly any soft samplers actually feel the need to do. With its new Sample Recorder, though, HALion 6 aims to bring back real sampling, enabling multisampled instruments to be created from scratch almost effortlessly. 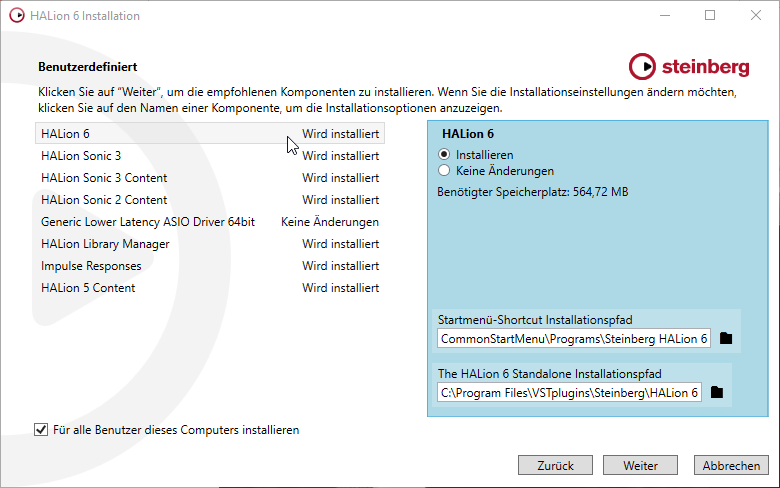 The Sample Recorder captures anything your DAW (or, in standalone mode, audio interface) can throw at it via its sidechain input - live audio, other virtual instruments, mixer outputs, other HALion 6 Layers...

Recording is started and stopped manually or automatically (with MIDI Note On/Off messages or by setting audio signal level thresholds), and the Auto Next function captures a series of notes as separate samples.

When recording stops, the samples are mapped across the keyboard - chromatically, as played, to white keys only, etc - with the gaps in between filled or not, as you choose. Auto Trim snaps start and end points to zero crossings or silence boundaries, while Auto Gain non- destructively sets the gain to peak at 0dB.

By keeping it simple and speedy, Steinberg has made Sample Recorder a potentially go-to system for quickly cooking up multisampled instruments and resampling from the host DAW. Apart from the inability to automate the creation of velocity splits (we’d imagine that’ll come along at some point), we can’t fault it.

HALion 6 offers all the tools required to make and export LUA scripted instruments for use with it and its playback-only little brother, HALion Sonic 3, hopefully heralding the start of a Kontakt-style soundware marketplace into which developers can launch their own graphically rich custom libraries like those that come with the software.

In the Macro Page Designer, knobs, faders, buttons, displays and other elements are laid out and beautified using an interface that requires a bit of commitment but shouldn’t cause too many headaches. If that doesn’t get you deep enough into the engine, you can instead turn to the geekier HALion Script, where more advanced programming and MIDI module design is facilitated. And at the other end of the complexity scale, the Library Creator is on hand for exporting VST Sound Libraries (containing samples, presets, macro pages, etc) to any Steinberg MediaBay-compatible software.

With its wavetable synthesis engine, real-time sampling functionality and easy script editing, HALion 6 is dizzying in its versatility, customisation and open-endedness. Whether you just want to exploit the countless sounds in its preset library or design epic instruments from the ground up using its multifaceted sampling and synthesis building blocks, it’s a true powerhouse.

I’m experiencing an issue with Halion 6 when I using it without DAW as a separate program and with DAW (Reaper).
I’ve set up Keystation61 MK3 as a Midi controller. The problem - in standalone version it doesn’t reflect any sound when I press the keys on it. It simply doesn’t react.
Though when I press keys on the virtual midi keyboard with my mouse, it is working. I don’t understand what is causing the issue.
The midi keyboard is working well with KONTAKT, I can upload a virtual instrument and play.
I thought the issue may lie in external sound card. I’ve updated the latest driver but it didn’t help. I tried to record it using KONTAKT and it was fine. With Halion it recorded the Midi parts but again no sound
I would appreciate any help from your side, thank you.
Coments are closed
Pinnacle Game Profiler FreeCrusader Kings 2 App